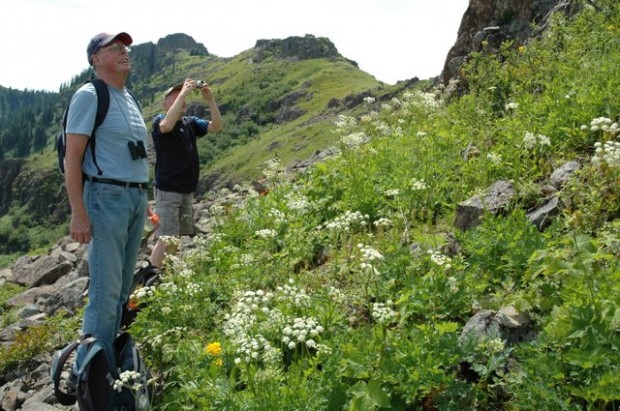 By Allen Thomas / The Columbian

It was just a bit hazy atop Silver Star Mountain, but Robert Nobile of Chicago still was savoring the view.

"It's got wildflowers and great views coming up,'' Nobile said. "You get to see four mountains, plus part of the mountain range. It's not too long, not too strenuous. It's just a great mix of plants, trees and meadows.''

Another Midwesterner, Tom Borneman of Oconomowoc, Wis., rated the hike an eight.

"The scenery is very good,'' Borneman said. "It's not very difficult with some good promontories to look from. The wildflowers are spectacular, at least I think they are.''

No stranger to mountains, Larry Rogers of Park City, Utah, also sat on the summit and rated the hike an eight.

Nestled in the southwest corner of the Gifford Pinchot National Forest, Silver Star Mountain is very unlike most of the backcountry on the west side of the Cascades.

Burned by the Yacolt fire of 1902, plus a later fire, the 4,382-foot peak and its surrounding terrain is mostly treeless.

Instead, Silver Star is a wonderful mix of steep ridges, cliffs, talus slopes, upland meadows and an amazing diversity of wildflowers.

"The variety and profusion of tiger lilies, penstemon, phlox, avalanche lilies and columbine present a tapestry of color equal to and found in the national parks of the Pacific Northwest,'' according to Nicholas Dodge in his 1987 "Silver Star Mountain A Short History and Plant List.''

Add to Dodge's flowers lots of lupine, paintbrush and beargrass.

"The views are unexcelled,'' Jolley wrote in his 1976 book "Hiking the Gifford Pinchot Backcountry.''

The easiest route to the summit of Silver Star Mountain is from the trailhead on Gifford Pinchot road No. 4109. It's about 1,200 feet of elevation gain using the Silver Star and Ed's trails.

Silver Star trail No. 180 is what's left of the former road to the summit. Skamania County had a radio repeater on top of Silver Star decades ago.

Ed's trail No. 180A parallels the Silver Star trail, but takes a much more scenic route through hanging meadows, under rocky blufs and through a rock arch high on the side of the Star Creek drainage.

From trailhead to summit is 2.5 miles. The steepness of the terrain and the windy nature of the ridges make it a relatively bug-free hike.

Richard Borneman of Vancouver said the only trail in southwest Washington he'd rate higher than Silver Star Mountain is the Loowit No. 216 loop around Mount St. Helens.

From Sunset campground northeast of Battle Ground, follow Gifford Pinchot road No. 41 for four miles to the junction with No. 4109. Pay attention, this just is easy to miss when driving east. Make a hard right turn at the junction and a sign identifying the road as No. 4109 is visible.

Road No. 4109 drops to cross Copper Creek then climbs four miles to the trailhead at road's end.

Warning: Road Nos. 41 and 4109 are passable for cars, but a truck or anything with a higher clearance is recommended due to the number of ruts and potholes.

The best soups to eat when you feel sick

Americans have 'cooking fatigue' after the pandemic

Americans have 'cooking fatigue' after the pandemic

Apple is bringing back ports for MacBooks

Apple is bringing back ports for MacBooks

Recent hot weather may be the reason for cool fishing in the Toutle and Cowlitz rivers.

With a record number of ducks counted on the breeding grounds this year, the Washington Fish and Wildlife Commission approved migratory waterf…

The second week of August is planting time for a second spring. Our climate allows for an autumn harvest of veggies and flowers planted now fo…

The end of of August means the start of autumn maintenance and fall propagation in the garden. This is the time to cut back, take cuttings, dig and divide early blooming perennials and start filling up the compost bin.

The month of September offers some of the best weather of the year for outdoor living. Don’t stop watering and feeding your container gardens …

Compleat Gardener: Off to the nursery

Are you ready for some fall color? This is the month when the leaves begin to change and seed heads form on perennial plants, giving the garde…

Compleat Gardener: Back to the roots with lawn care

The third week of September is when the shorter days and cooler nights awaken any summer dormant lawn. If you allowed your lawn to "go golden"…

October is the time to evaluate the best plants and products from summer of 2012.

Fall is here and frost is slipping in to finish off any summer plants, but there is still time to add some color to container gardens and plan…

The third week of October is time to winterize the patio furniture and vegetable garden, roll up the hoses and stow away the mowing machine. H…

Compleat Gardener: Make the most of fall color

The end of October is a great time to celebrate all that is dark and orange in the garden. Great foliage color makes these plants perfect part…

Compleat Gardener: Make those leaves work for you

The start of November means there is still time to accomplish some field goals before the first big freeze. You can mow the lawn as long as th…

The second week of November is my favorite week to plant bulbs. By now there is no use putting up with the water-logged geraniums, frost-bitte…

There is still plenty of time to dig in the garden before winter buttons things up. As long as the ground is not frozen solid, you can transpl…

The beginning of December is when you should purchase a poinsettia plant. The selection is better early in December, the plants will be fresh …