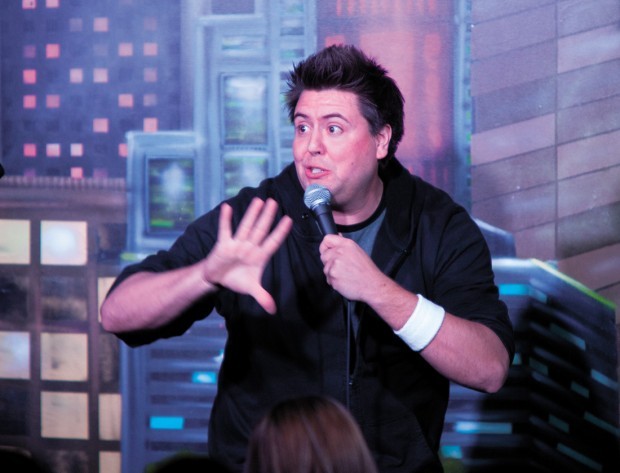 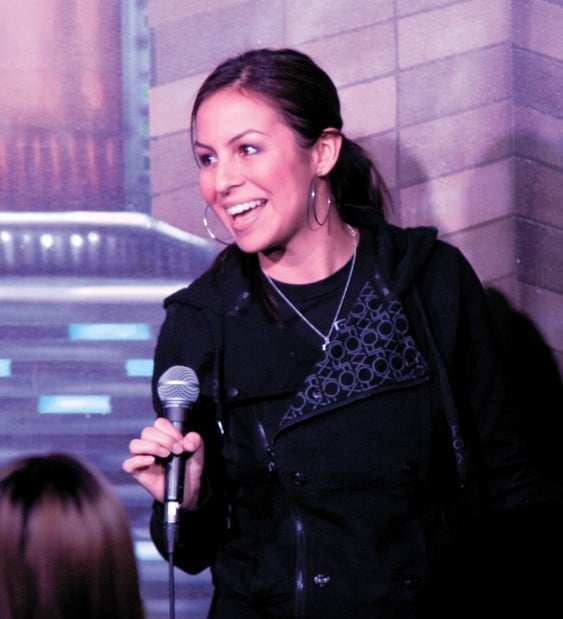 Aaron Therol paced the comedy club dressing room, checking a notebook where he jots down jokes. He fretted about a problem with the amplification for the guitar he uses during his stand-up comedy shows.

But all signs of angst disappeared when Therol took the stage at the Helium Comedy Club in Portland last week.

The Helium is only 50 miles from the stage of R.A. Long High School, from which Therol graduated in 1997. Therol's road from high school drama geek to professional comedian is much longer, involving a decade of auditions and rejections in Los Angeles. But Therol has built upon an early infatuation with theater in a mill town to carve out a career as a comedian and singer in the competitive entertainment world.

Therol's appearance at the Helium club was his first performance in Portland. He was an opening act for Anjelah Johnson, who was a regular on MADtv and had a role in the 2010 movie "Our Family Wedding."

Therol is soft-spoken in person, and his stage persona is lower-key than that of many comedians.

Dressed in a black sweatshirt and jeans, he started out with a joke about Washingtonians coming to Oregon only to avoid paying sales tax. He joked about everyone's secret embarrassment — underwear with holes in it.

Therol chatted with two women in the front row, then strapped on his guitar and ad-libbed a silly song about them.

"My material is clean," he said during an interview. "Because I don't do much on-edge stuff, it's more challenging. If you're going to keep it clean it takes more creativity" than a routine laced with four-letter words.

Therol said his material is usually drawn from everyday life situations, such as eating. "I find it comes from every little thing," he said.

Therol has been on stage for most of his 32 years. His first acting experience was in 2nd grade, in a play staged by Jester Children's Theatre in Longview.

In 8th grade, Therol tried out for the 1992 Mainstage Theatre production of "The Wizard of Oz" — and didn't get cast. He went to rehearsals anyway, and sat in the back corner of the R.A. Long auditorium taking notes.

The following fall, the late Mainstage director Dana Brown chose the persistent thespian for a part in a production of "Fiddler on the Roof."

"I think I pushed a cart, but I was very excited about that," Therol said.

After that, he acted in every Mainstage play he could. For his senior project, Therol built a set in his garage and made a vampire film.

"I was saturated in the arts and performing" during high school, he said. "It was the only thing I really excelled in. My report card was terrible except in drama."

Therol said theater helped him get through school during his parents' divorce. "It really gave me something to hold onto." He keeps a photo of Brown on a wall in his LA apartment for inspiration, he said.

After graduating from RAL, Therol was accepted at the Cornish College of the Arts in Seattle, but he couldn't afford the tuition.

Three years later, he decided to make the fabled American journey to Hollywood, without knowing anyone there. His mother, Vicky Mottern, moved with him to California.

Therol soon found work at the Universal Studios theme park, where he'd play such characters as Shrek, Frankenstein's monster and Bullwinkle the moose for tourists. (At 6 feet 1 inch, he ends up playing hulking characters.)

He once hosted a stage show at Magic Mountain. "I'd say, ‘Are you guys ready to meet Bugs Bunny?' Then we'd sing and dance."

Therol studied improv at the Groundlings Theatre, which boasts alumni including Lisa Kudrow and Jon Lovitz. And he and some friends started Fishes and Loaves, a faith-based comedy group which is scheduled for its seventh gig at St. Quentin prison.

"They actually are some of the best audiences," he said of the inmates, many of whom are convicted murderers. "They give you the best suggestions" for material — and always provide a standing ovation. After the shows, "we are able to pray with the guys."

Therol met Anjela Johnson, the comedian he's opening for in Portland, in improv groups before she became a bigger name in stand-up and movies. Johnson and he brainstorm material together and often do college shows together.

"He's a very loyal friend," Johnson said. "He loves God with all his heart." Before the Portland show, Therol, Johnson and comedian Geoff Keith joined hands and prayed in the dressing room.

"Me having faith and a Christian background has kept me afloat," Therol said.

In the musical arena, Therol and Jane Kim, a classically trained cellist, formed the music duo Aaron and Jane in 2009. He sings and plays guitar. They call their music "soothing, simple, with a hint of melancholy longing."

"We've been playing a lot of clubs in LA," Therol said, including the acoustic lounge at the House of Blues in Hollywood. Their album "A Long Road Home" is available on iTunes.

"When I do comedy, I jump up there and I'm a wild and crazy guy," he said. "When it comes to music, I'm more mellow."

Therol said he dusted off set-building skills from his Mainstage Theatre days to build the set for a video he and Kim shot recently.

He makes his living, so far, from the comedy side; he said he gets a paid comedy gig two or three times a month.

Not that he can afford to quit hustling for work. "I'm always out there auditioning," he said.

Therol thought he had a small part in the 2003 movie "The Fighting Temptations," starring Cuba Gooding Jr. and Beyonce. After getting dressed for the part, he was told it had been written out of the script. "I ended up not working but still getting paid to do absolutely nothing."

He's learned the hard way that "the entertainment industry is 99 percent rejection and 1 percent things happening. Things will pop up here and there.

"You have to be really persistent and able to handle being in a big city — and patient. It's a waiting game."

Aaron Therol dragged his co-comedians Anjelah Johnson and Geoff Keith out of bed early last week the morning after a late-night Portland show.