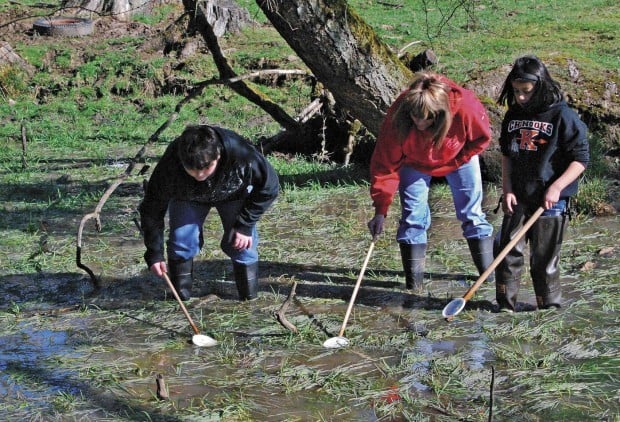 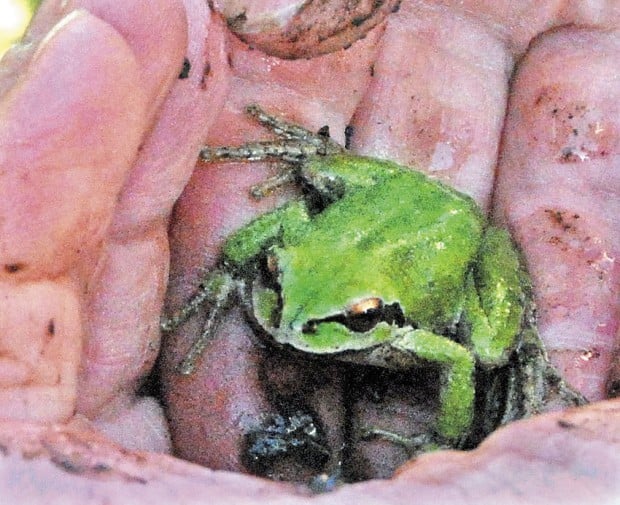 The Northern Pacific tree frog, also known as the chorus frog, is common near Kalama. 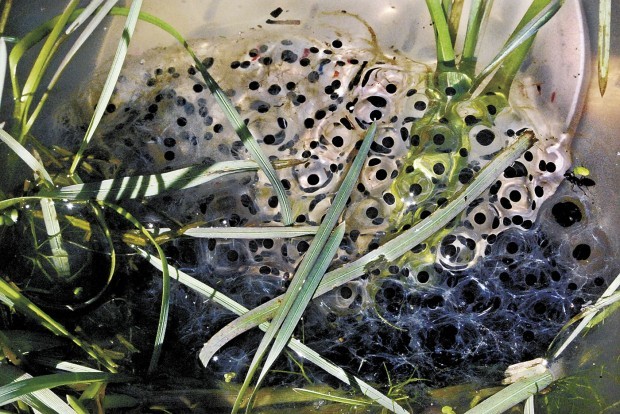 Egg masses are relatively easy for volunteers to count.

When three red-legged frogs moved into the pond at Ann Kastberg's home near Castle Rock, she couldn't be more delighted.

"They got used to me," she said. One of the little froggies even let her pet him. "They're as cute as can be!" she told an audience of frog counters during a recent training session.

Under Kastberg's enthusiastic oversight, dozens of volunteers have hopped to it during the county's first official amphibian survey. Adults and youth groups are wading through local ponds and wetlands, counting frogs, salamanders and the egg masses they lay this time of year.

The survey is an outgrowth of a similar effort that started in Clark County two years ago. Though many amphibian species are declining worldwide, little has been done to document frog and salamander populations here, according to Peter Ritson, an environmental scientist who set up the the Clark County effort.

Kastberg, an accountant by training, is the retired assistant regional manager of the state Department of Natural Resources. She's self-taught about frogs. "This is just a lot of fun," she said. "The more you look in the water, the more you know."

A 4H group lead by Maxine Nieman surveyed a shallow pond near Kalama.

As the children walked through a cow pasture toward the pond, a chorus of ribbits told of good frog habitat. Soon after reaching the pond, 9-year-old Jenna Burnell scooped up a bright green Northern Pacific tree frog for all to admire.

However, the main goal was counting egg masses, the goops of jelly-like material about the size of an orange or grapefruit that hold frog eggs. Soon thereafter, Jenna and her fellow searchers started finding egg masses among the plants in the pond.

Kastberg called out tips on telling whether an egg mass was from a red-legged frog, Northern Pacific tree frog, Northwest salamander or long-toed salamander, the most commonly found species locally.

A few of the masses already had polliwogs. "If it has polliwogs, it's hatching," Kastberg said. "They become tadpoles really quickly," about three weeks after the eggs are laid.

Just as daffodils are already blooming during this warm winter, the amphibian hatch seems early too, Kastberg said. Egg masses started appearing in late January, and the count was much higher Saturday then during the previous survey two weeks earlier.

Kastberg has designed what she calls "frog wands" that make it easier to examine the egg masses without handing them directly. The wands consist of wooden measuring sticks with a white plastic disk on one end that gets pushed under the egg mass.

"We are the only folks using frog wands," Kastberg said. "They're a local invention."

The count at the Kalama pond was 28 Pacific Northern tree frog masses, two from long-toed salamanders and one Northwest salamander.

A few hours later, Kastberg and her husband, Russ, met with Boy Scout Troop 313 from Castle Rock, which was camped out on DNR land a few miles north of town.

Surveying a pond near their campsite involved pushing through bank-side brush, taking care not to wade into water deeper than wader tops.

"We're going to look really hard and really slow," Scoutmaster Cameron Sharpe told the four Boy Scouts and four Cub Scouts. "You can poke the grass around and look underneath," said Sharpe, a WDFW fish biologist.

Kastberg had the Scouts feel a Northwest salamander egg mass, which is firmer than those of other critters in the pond. "There is nothing else that feels like this," she said.

After an hour of wading and egg-counting, Sharpe was satisfied. "Everybody is finding eggs and we're learning how to do it," he said.

The boys seemed pleased with their efforts, too.

"I didn't know there were all these frog-egg little things," said Chris Millward, 11.

Jacob Wilbur, 12, said he was surprised how many egg masses were scattered around the pond.

So far, five other sites have been surveyed in Cowlitz County, ranging from a pond behind the Longview Wal-Mart to Merrill Lake near Mount St. Helens.

Surveys will continue until the end of March, with results compiled into a database.

The Department of Fish and Wildlife's goal is to document amphibian populations and see how they change over time.

Marc Hayes, a WDFW amphibian and reptile research scientist, said his agency welcomes the "citizen scientist approach." WDFW doesn't have enough funding to hire people to do the work, he said.

The goal is to count egg masses at about 50 sites over the years.

"We're spending a lot of money on wetlands," which are generally good amphibian habitat, he said. "We need to evaluate how well they're doing."

Two species that previously lived in Southwest Washington area — the spotted frog and Western toad — have largely disappeared from the area. Habitat destruction, pollution, pesticides and climate change may all be factors in the general decline in amphibians.

Local governments, not the WDFW, make the ultimate decisions on how development affects amphibians, he said.

"We're trying to provide tools that would feed into their making those decisions. We don't tell them what to do."

The Northern Pacific tree frog, also known as the chorus frog, is common near Kalama.

Egg masses are relatively easy for volunteers to count.
© Copyright 2020 The Daily News Online, 770 11th Ave Longview, WA | Terms of Use | Privacy Policy
Powered by BLOX Content Management System from TownNews.com.
You don't have any notifications.