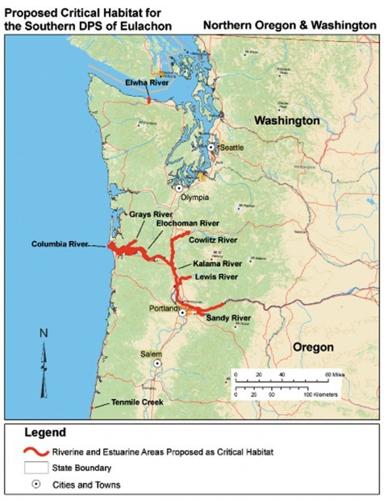 PORTLAND — Federal fishery authorities have proposed designating the lower Columbia River and many of its tributaries as "critical habitat" for smelt.

But the designation wouldn't affect anglers and owners of riverside property much because the waters are already critical habitat for other species of fish listed under the Endangered Species Act, according to biologists at a Wednesday meeting.

The National Marine Fisheries Service has proposed that 292 miles of river become critical habitat for smelt.

After a public comment period that ends March 7, NMFS will write a recovery plan for smelt.

Smelt runs on the Cowlitz and other local rivers started to falter in the 1980s, and the last decent run was in 2003.

The Cowlitz Indian Tribe petitioned to have smelt listed under the Endangered Species Act, and the National Marine Fisheries Service last March listed the once-numerous fish as threatened.

NMFS listed climate change, declining river flows, shrimp fishing bycatch and predation by seals and sea lions as reasons for the smelt's recent decline. The federal agency acknowledges that sedimentation from Mount St. Helens may have damaged smelt spawning grounds on the Cowlitz, though smelt are in decline all the way from Northern California to British Columbia, the area covered by the listing.

In this region, critical habitat is proposed for the Columbia River downstream of Bonneville Dam, the Cowlitz downstream of the Barrier Dam near Salkum, the Kalama downstream of Modrow Bridge, the Lewis downstream of Merwin Dam, and the lower reaches of the Elochoman and Grays rivers.

Federal agencies can't destroy or adversely modify designated critical habitat, but the designation doesn't apply to what citizens do on private land. "It's restricted to federal agencies only," said Marc Romano, a NMFS marine biologist. "By and large, it likely won't affected the average landowner along these areas at all."

In the lower Columbia basin, 13 of the 14 stocks of salmon and steelhead are already listed under the ESA, along with bull trout and green sturgeon. All the waters proposed for critical smelt habitat are already designated as such for at least one other species, Romano said. "We found there's already a very high level of protection" in these areas, he said.

However, the fact that smelt spawn at different times of year than salmon and sturgeon might be an issue, he said.

NMFS estimates that the proposed habitat designation would cost $460,500 per year, though most of that is the cost to governmental agencies, Romano said.

• Disposal of material dredged from the Columbia River might disrupt smelt spawning, so dredging costs might go up as disposal sites were adjusted.

• Flows released from the Mayfield Dam might damage smelt spawning sites downstream in the Cowlitz. If the flow schedule had to be changed, it might decrease Tacoma Power's revenue from electricity generation.

The Washington and Oregon departments of fish and wildlife aren't allowing any sport or commercial smelt dipping this year.

Romano said federal action so far doesn't prohibit fishing. "The states are being proactive by closing these fisheries," he said.

Fishing is allowed on runs of ESA-listed salmon and steelhead runs, but only hatchery-raised fish may be kept.

For years, state biologists have admitted that they know much less about smelt than they do about salmon and sturgeon. Rough estimates of the size of smelt runs has been based on commercial landings — which have been eliminated this year. "We don't have a lot of information on eulachon," Romano said, using the official name for smelt.

But the ESA listing has already kick-started smelt research. WDFW has received a $560,000 federal grant for smelt research, and the Cowlitz Tribe received another $304,000. The tribe has hired a new biologist to focus on smelt research, said Nathan Reynolds, an ecologist for the tribe.

Researchers will study where smelt spawn. Biologists hope to develop a way of estimating the size of smelt runs by counting larvae now that fishing isn't allowed.

"My guess is that three to five years out, there will be far more known that has ever been known" about smelt, Reynolds said.

Comments on the critical habitat proposal for smelt will be accepted until March 7. Comments may be made at www.nwr.noaa.gov, where detailed r…

This Christmas Tree hack is a must see

Just because you can buy it online, doesn't mean you should

Just because you can buy it online, doesn't mean you should