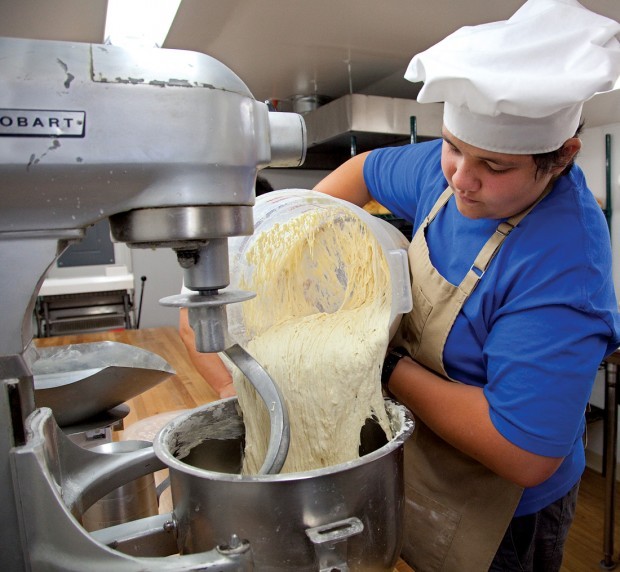 Robert Ahrens of Kalama, who runs his own artisan baking company, pours his fermented ‘starter’ into a commercial mixer to begin the process of making sourdough bread. 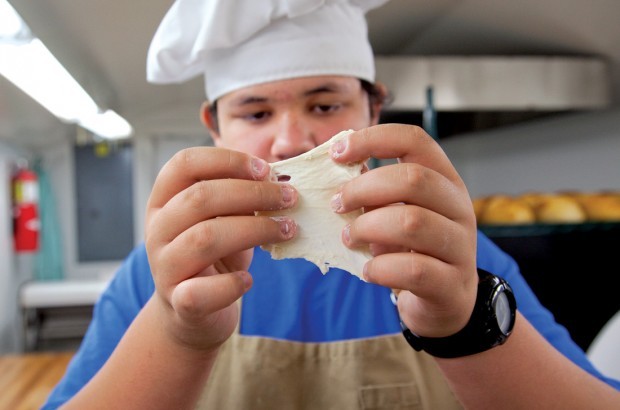 Robert checks the dough to see if it’s ready to be shaped into loaves that will rise for four hours. Translucent dough that does not tear or break apart, as with this piece, means it is ready. 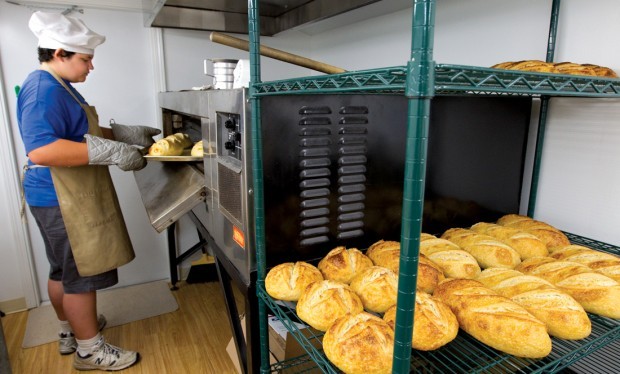 A dozen loaves can bake at one time in the second-hand pizza oven that the Ahrenses purchased in Long Beach. 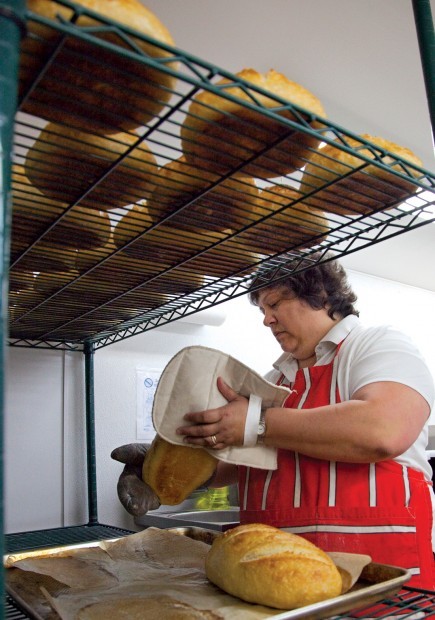 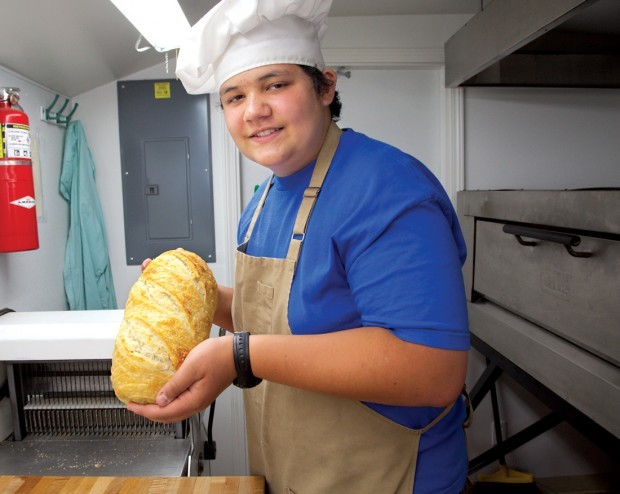 By Cathy Zimmerman / The Daily News

This summer, Robert Ahrens is learning to read bread.

The 13-year-old Kalama boy, who is homeschooled, is four months into his own artisan bakery business. He has learned how to obtain a loan, build a free-standing baking facility, apply for permits and licenses, and make sourdough bread.

Robert now wholesales as many as 130 loaves a week to a Kalama grocery.

Edie Ahrens, who once worked as a journeyman baker and loves making sourdough for family and friends, was up for the idea. The boy’s father, truck driver Victor Ahrens, wasn’t so sure.

"He didn’t think we should do it," said Robert, because the enterprise would eat into other learning projects and family time.

But Edie and Robert came up with a workable timetable and their enthusiasm won him over. The boy will bake three days a week during the school year and four days a week in summer, for about four hours a day.

"He knew we really wanted to do this, and it wouldn’t be a full time job," said Robert.

In movies, people start whipping up fancy tarts in their fancy kitchens and overnight, they’re rich.

Real life is more of a slog. But Robert’s project is still pretty amazing.

The Ahrenses applied for permits to pour a concrete pad and anchored a 10-by-20 foot, $1,100 Tuff Shed to it in the family’s backyard.

"We used slave labor," Edie joked, referring to Robert and his grandpa, Jack Ahrens, a truck driver and wood worker.

While Robert and Jack modified the shed, Edie scoured Craig’s List for bargains on a commercial pizza oven in Long Beach, two refrigeration units, a 20-quart steel Hobart mixer and a 10-foot butcher block counter for $300 that was an exact fit for the metal frame they had found for $25.

With utility shelves to cool loaves, fluorescent light fixtures and a small air conditioner, they were good to go.

The Kalama Shopping Center pays Robert $4 for every loaf and $2 for every round.

He pays $200 a month on the loan and buys his flour from Cash and Carry in Kelso.

Money left over after expenses goes into savings for a trip he will take to China this fall, a part humanitarian, part tourism vacation with fellow homeschool students and several parents.

He plans to operate the bread business through high school; with a strong interest in music, he’s not settling his future right now.

"I’ll go to college, then come home and see what I want to do."

Finding the rhythm of the bread

Sourdough is made from flour, water and salt. Period.

The bread gets its distinctive tangy flavor from a yeast culture called a "starter:" flour, yeast and enzymes that ferment and grow live bacteria. The same sourdough starter can be kept alive by adding more flour and water, so there’s always live culture to flavor sourdough as it slowly rises.

"You have to learn how to read your starter, how to use it to make your bread. ...A lot of people are intimidated by it. You have to get a feel for it; it’s not a real stable medium."

She makes it a point to distinguish natural sourdough from the commercial variety.

"The yeast is in the air," she said. "There’s yeast all around us."

Because large bodies of water generate a lot more yeast, places such as San Francisco, Alaska and Seattle are renowned for their sourdough, she explained. "We’re lucky to live so close to the Columbia River."

Natural leavening takes longer, Edie said. "You can get bread faster. It’s just not going to taste as good."

Bakers use ratios of flour and salt to water, or about 20 percent water and 1 percent salt relative to the amount of flour. It takes three days to make a batch of sourdough loaves, time for the starter to act, the four-hour rising, the refrigeration and the baking. Robert’s batches are always somewhere in that cycle, so every day he has finished loaves to take to the Kalama Shopping Center, the only place that carries the bread.

Timing is essential to sourdough flavor, his mother said.

Because commercial breads are made fast, the tang of store-bought sourdough is achieved by adding vinegar and citric acid.

"That’s why some people don’t like sourdough," she said. Sour additives mean "it tastes sour right on the front of the flavor. It’s not subtle, where natural sourdough has flavor all through the dough. You taste it all through the chewing."

With sourdough, the result is also healthier than white breads tend to be.

"Sourdough is a pro-biotic," Edie said. "Even though it’s made with white flour, it’s a good choice for diabetics and people with wheat sensitivity, because the bacteria breaks down the flour proteins. It doesn’t spike your blood sugar."

Robert enjoys his time in his one-man bakery, listening to the radio and keeping his eye on things.

As the steel dough hook slowly rotates, the young baker waits for the dough to take on a smooth sheen, then pulls out a small piece. If he can stretch that dough thin and translucent and it doesn’t tear and break, it’s ready to be shaped into loaves.

Before baking, Robert shapes the dough into 2-pound, oblong loaves or round 1-pound loaves. Then he scores, or slashes, the tops with a knife. "That’s so the bread won’t burst open, and it won’t look so good," he said.

It took Robert three weeks of experimenting before he learned how hot to set the top and bottom heat gauges in the oven, and discover the oven’s hot spots. Now, he knows just when to turn the bread sheets during baking, "so one side doesn’t get darker than the other," he said.

While they bake, he also pours water on the bottom of the oven, twice during the 25-minute baking time, to create steam. The steam keeps the bread from forming a crust too soon, Roberts said.

After the finished loaves cool, he puts them through the bread slicer, then eases each one into a clear plastic bag that get his own label: "Kalama Sourdough Bakery."

Robert Ahrens’ artisan sourdough bread is available at the Kalama Shopping Center, a grocery at 223 N. First in downtown Kalama.

How to prepare your home for cooler weather

How to change careers smartly with these easy steps

How to change careers smartly with these easy steps

2011 has definitely been a year filled with lots of exciting events.

A technique thousands of years old has helped 15-year-old Robert Ahrens of Kalama find what he believes will be his path in life: a baker of bread.

Robert Ahrens of Kalama, who runs his own artisan baking company, pours his fermented ‘starter’ into a commercial mixer to begin the process of making sourdough bread.

Robert checks the dough to see if it’s ready to be shaped into loaves that will rise for four hours. Translucent dough that does not tear or break apart, as with this piece, means it is ready.

A dozen loaves can bake at one time in the second-hand pizza oven that the Ahrenses purchased in Long Beach.