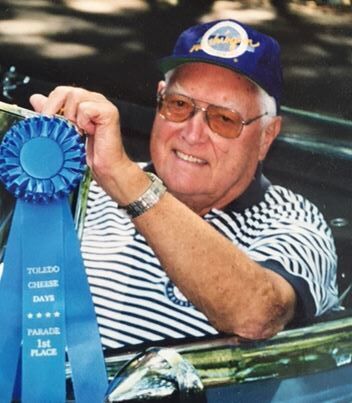 James A. Nelson (Cdr. Ret), died of natural causes on April 28, 2021, in Rancho Mirage, Calif., three years and one day after the passing of his dear wife, Jean.

Jim was born in rural Missouri on June 25, 1923, and joined the U.S. Navy in 1942. During his 27 years in the military, he piloted some of the Navy’s most advanced carrier aircraft, including the Douglas A-3 Skywarrior and the F-4D Skyray.

On May, 18, 1980, “the day the mountain blew,” Jim arrived in Washington. He settled in Toledo, close to the Wallace family, and opened a general law practice which he continued for 37 years. During that time, Jim established close and enduring friendships, participated actively in community events, and welcomed family, friends and visitors for conversation, legal support, and, for many years, Sunday pancakes.

Nelson entered college at 15 to study mechanical engineering, a preparation he would later use restoring antique cars. He was as fervid a defender of justice as he had been a defender of America during WWII and “the Cold War.”

In addition to Jean (Weyman), Nelson is predeceased by Mary T. (Covaleski), the beloved mother of his children, and by Billie (Gallow). He leaves three daughters, Mary A. Nelson, Patrice Nelson, and Gretchen M. Nelson, grateful for his time on this earth but deeply saddened by his loss; two grandchildren, Hannah and Matthew, and two great grandchildren, Lawrence and Winter.

Nelson was a good man, generous, responsible and intrepid, who lived life fully and died with grace.

Study: Access to nature is linked to improved mental health

Study: Access to nature is linked to improved mental health