Huntdown captures '80s lightning in a bottle
0 comments
Share this
× 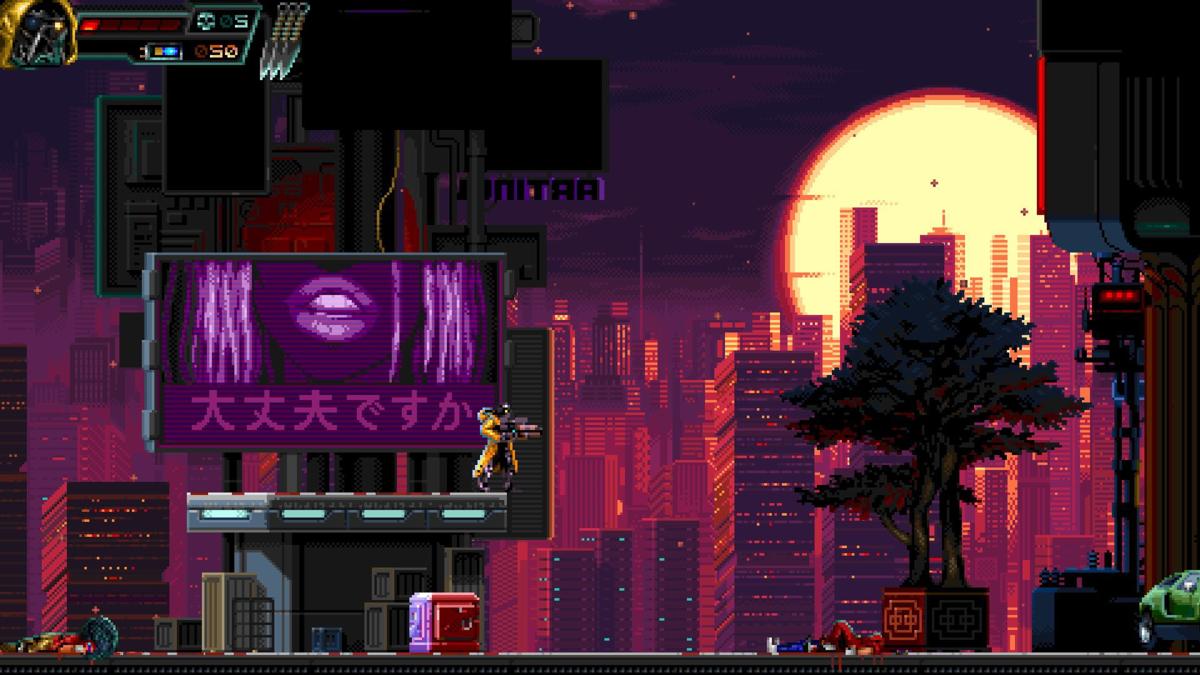 Huntdown's visuals may tempt players to stop a moment and look out over the city they're here to save... for a price. 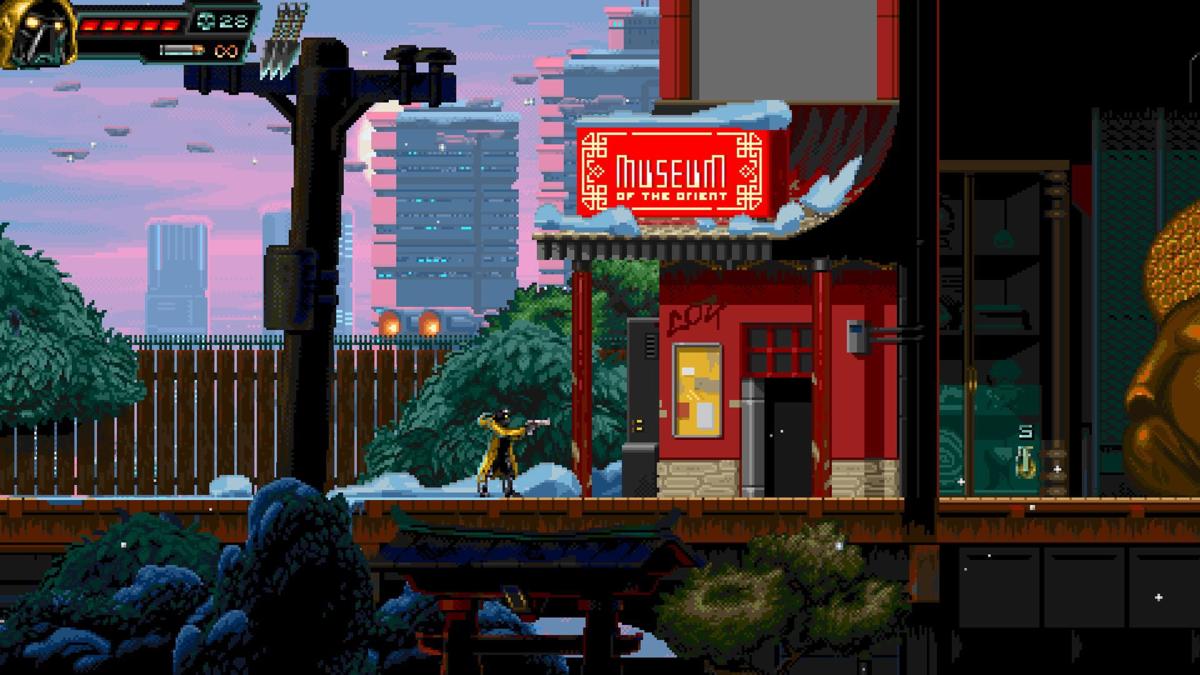 Approach the entrance of the Ninja Museum with caution. Yes, of course there's a Ninja Museum. 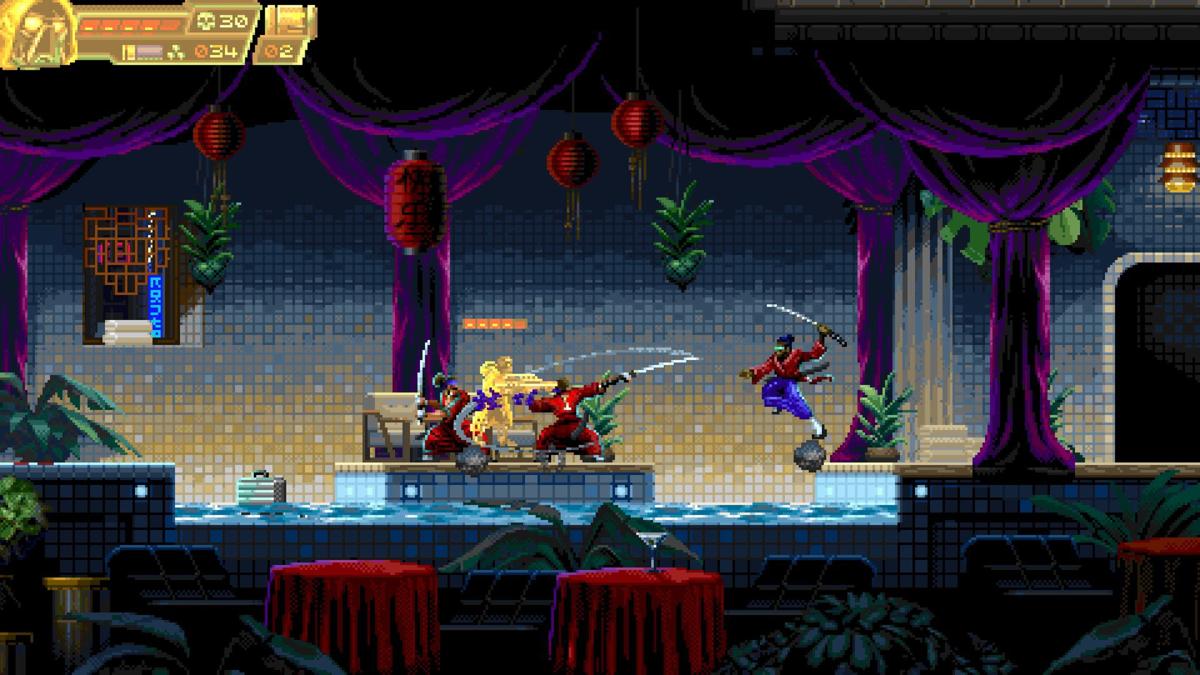 The 1980s action game had a different edge: ridiculousness. They were clots of poorly-translated text, rudimentary code, and weird Japanese tropes. In this pre-Mortal Kombat, pre-Wolfenstein world, every game was essentially G-rated, with dots for bullets, bloodless kills and bodies that blinked and vanished.

The teams that made these classic games and classic movies at the same time were living in different places, traveling in different circles, following different rules. So yes, while you could come home from “Die Hard” or “They Live” and pop the Contra cartridge into your old Nintendo, that same edge wasn’t there.

Enter Easy Trigger games, a small Swedish developer that has decided those game tropes and movie tropes need to combine, in a game called Huntdown. And they have done their work well. They combined ‘80s action movies and ‘80s action gameplay in a way the actual ‘80s never could, and it’s beautiful.

Huntdown is a simple, side-scrolling action game built around only being able to shoot horizontally, just like Mega Man and many other shooting-heavy classic games of that era. But it perfectly layers in the sense of urban depravity on display in movie theaters just as a generation was discovering those Mega Man games for the first time.

There have been other games that have attempted this combination, like Broforce. But those were parodies. Huntdown isn’t here to satirize the ideas it draws on — it just wants to participate in them. And because it’s earnest and because its pixel-art team knocked it out of the park, it makes the gameplay chocolate and action-movie peanut butter fuse like never before.

In Huntdown, the police are overwhelmed by themed gangs right out of 1979’s “The Warriors.” Enemies sport mohawks, dart around on roller skates or hoverboards, and twirl their pixelated butterfly knives. They emerge from side alleys preceded by their menacing shadows. They crawl out of the manholes, set buildings on fire, spray their gang tags on ambulances.

You play as one of three over-the-top bounty hunters brought in to clean up the streets that no one else can. You’ll receive your instructions through the retro-futuristic TV screen built into your car, which appears to be some kind of beater Lamborghini.

As you advance through the levels, you climb from filthy tenements into a Yakuza-run downtown complete with robots, flying cars and the ritzy Ninja Museum. Every level is unique, and they’re drawn with just the right amount of dithering and retro touches to make the pixel art look authentic and right.

Gameplay is about equivalent to a Mega Man X title. You can pick up quite an array of weapons and throwable devices, and you can take cover and slide. Enemy variety is high. It’s well-tuned, but a few minutes into the game, you’ve done everything you’ll ever do — there’s no progression in your basic moves.

Huntdown also contains absolutely nothing roguelike, procedural or emergent. There are exactly 20 levels, each with a unique boss. The only thing you get for beating the game is an unlockable harder-than-hard mode. This is very much in line with its inspirations, and there’s no question that retrying these levels can be fun.

Huntdown’s difficulty feels perfect in 2-player mode, where you can revive your colleague. But co-op is available only in person, and solo difficulty falls right in line with Huntdown’s controller-snapping ancestors. It wouldn’t have broken the retro charm to offer a few more rewards for our hard-earned victories.

Your tactical options are very limited. You can’t throw melee weapons or kick the explosive barrels at enemies. There are no Streets of Rage super moves. Being able to earn, let’s say, a better sidearm or a double-jump or a riot shield would have added longevity to a small moveset.

But it remains that Huntdown combines two things that should be combined, better than they’ve ever been combined before. And even the shortcomings are honest shortcomings that are a natural part of that package.

As the pandemic continues, video games can offer escape and connection

You don’t have to be an avid gamer or even own a video game console to enter these vibrant and immersive worlds.

Huntdown's visuals may tempt players to stop a moment and look out over the city they're here to save... for a price.

Approach the entrance of the Ninja Museum with caution. Yes, of course there's a Ninja Museum.